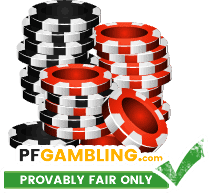 Provably Fair technology allows players to verify the fairness of each individual hand in real time. This technology is already integrated into the vast majority of bitcoin casinos that offer provably fair games.  And while the technology is still in it’s infancy stage, the concept itself is transforming how most people are looking at the industry and where it’s heading.  The poker market is particularly interesting because of a developing decentralized global platform – Pokereum.

This page was created to inform players on Provably Fair Bitcoin poker, Pokereum and everything they need to know regarding the PF poker industry. The future looks bright for Provably Fair poker. Understanding the global poker initiative before it hits the market will give you an edge over other players.

Our team of industry analysts have put together a list of the best available Provably Fair poker sites. These sites offer poker variations like Texas Hold’em, Omaha Hi/Lo and more—all of which complimented with Provably Fair Technology. Our recommended sites feature bonuses for players that give them additional money to bet with, replenish bad beats and more.

What Is Mental Poker?

‘Mental poker’ is an industry term that applies to issues presented with online poker. Specifically, issues with trust, fairness and reliability. Online poker sites have had a history with issues involving money laundering, payment processing, cheating, etc., but the industry has come a long way through stricter regulatory standards. Provably Fair Technology and Pokereum aims to solve all the issues with mental poker prevent cheating and other financial problems.

Pokereum is an innovate poker platform—the first of its kind. It is a decentralized peer-to-peer Poker network existing on the Ethereum blockchain. The Ethereum blockchain differs from the Bitcoin version because it supports technological products and services (along with its own cryptocurrency in Ether). This network proposes to maximize the speed of player actions and processes while maintaining a high level of security and authentication. The network is overseen by the SuperDao organization.

SuperDao is a coalition of independent agents collaborating via open source software built on the Ethereum blockchain. This creates an environment where agents can work together despite not being in the same geographic area. If Pokereum is successful in its launch, it could revolutionize international online poker games.

How Is Pokereum Attempting To Change The Industry?

Pokereum aims to introduce a global and decentralized network that permits users to initiate and broadcast games to players all over the world. As of now, the network is about to launch a beta version for players to test out. This decentralized peer-to-peer network allows for Provably Fair Technology to be implemented in every game.

One of the biggest issues Pokereum aims to fix is trustworthiness of games. Provably Fair Technology helps with verifying fairness of games, but Pokereum developers have taken another step to maintaining a consistent standard. During an individual poker hand, player actions resulting in state changes are sent out to all opponents at a table during the game session and verified through a challenge response protocol known as jury pools, which are groups of randomly selected players based on high stake and activity. Jury pools are switched out routinely by an automated system on the Ethereum network. If players violate the network rules, they risk losing their stake. This fosters an environment of fair play.

Most modern online poker games utilize third party game hosts to create an environment for what it supposed to be secure online gaming. These third party hosts are tasked with ensuring fairness of their games and the systems running them. There have been reports of widespread issues that leave these hosts looking skeptical. Issues with payment processing, high processing fees, high table rakes, geolocation and game software have contributed to the poor perception of online poker. Pokereum believes their system of cryptographic hashes will make for a transparent poker room.

Collusion is another issue within the online poker sphere. In this context, collusion is the act of several players plotting an attack on other unsuspecting players. This allows the colluders to alter the odds in their favor and reap considerable payout benefits. Pokereum only permits players to sit at one game at a time through random table placement. In order to join a table, a player must put in a request that is checked by the designated jury pools. If a player ID is found active at another table, the player request is denied. While players may not like the fact they can only sit at one table, this system guarantees that players cannot collude at the same table against unsuspecting players.

How Will Provably Fair Poker Work?

Provably Fair poker sites are still in the developmental stage, with only a few established companies operational. That being said, our team of  analysts have set some expectations for the emerging Provably Fair gambling market. One of the more exciting features we expect is a leaderboard table with statistics that can help players learn about the game. For example, statistics on the odds of certain hands coming up. We also expect a dashboard menu running along the top of the game interface with several tabs. The tabs would allow users to easily navigate between the game, a how-to-play section and a Provably Fair testing section.

Provably Fair Technology is exclusively run on cryptocurrency gambling sites. Bitcoin, Ethereum and Litecoin are examples of some the most recognized digital currency forms, but we expect Provably Fair poker sites to welcome several alternative options. Furthermore, in accordance with the leaderboard mentioned earlier, there should be data regarding how much has been wagered with different cryptocurrency forms.

Other Provably Fair Casino Games In Our Series